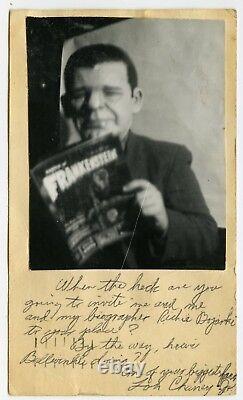 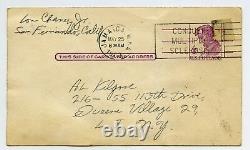 DETAILS: Original hand signed photo card by Lon Chaney Jr. Along with a lengthy inscription to writer and artist Al Kilgore. Reads: When the heck are you going to invite me and my biographer Richie Bojarski to your place? By the way, how is Bullwinkle doing? One of your biggest fans, Lon Chaney Jr.

The card is accompanied by a candid photograph of Chaney holding up an issue of Frankenstein magazine which Kilgore had drawn for. His reference to Bullwinkle is because Kilgore was the regular comic book artist on the Rocky and Bullwinkle comic series for Dell Publishing and Jay Ward Studios.

Reverse has both Kilgore's and Chaney's addresses written in hand by Chaney himself. 5 1/2" x 3 1/2" inches. Kilgore was a noted comic book artist, animator, writer and film maker. He worked for Dell Publishing starting in the late 1940's and was responsible for the publishers magazine art department. Starting in the early 1960's he was a regular contributor to Dell's Four Color comic book series.

From 1962-67 he was the artist on the Bullwinkle comic strip for the Bell-McClure Syndicate. He also drew regularly for Gold Key, Whitman, and Charlton comics throughout the 1950's-1970's. In 1976 he won the National Cartoonist Society award for excellence. In addition to his comic illustration work, Kilgore also contributed art and stories to television, film and theatrical releases.

GUARANTEE: We offer a lifetime guarantee on all of our signed items to be hand signed by the person stated. We forensically examine all of our items prior to listing to make certain they are authentic and guarantee their authenticity for the lifetime of the item. Oxxbridge Galleries was founded in 1987 and specializes in vintage paper items. You will be pleased by the friendliness and knowledge of our staff.

This item is in the category "Entertainment Memorabilia\Autographs-Original\Movies\Photographs". The seller is "oxxbridgegalleries" and is located in this country: US. This item can be shipped worldwide.